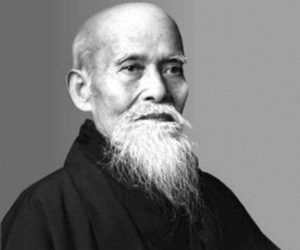 Morihei Ueshiba was born on December 14, 1883 in Tanabe, Wakayama Prefecture. Throughout his life Morihei devoted himself to hard physical conditioning through the practice of martial arts. He transformed the classical warrior survival tactics into an effortless, yet effective martial art. After the loss of his father in 1920, he began delving into religion in the hope of finding a deeper significance to life, all the while continuing to pursue his studies of budo, and martial arts. He understood that idealistic peace and harmony was through the balance of martial survival with philosophical and political ideologies. In 1942 he created the modern martial art named to best describe his complete and ultimate beliefs – Aikido

At the age of 17 Hirokazu Kobayashi began his Aikido journey under O’sensei and continued to study under him until O’sensei’s death in 1969. Throughout Kobayashi’s Aikido journey he would occasionally accompany O’sensei on visits throughout Japan and, in 1977, started holding Aikido seminars internationally – mostly visiting Italy, France, Switzerland and Germany. His techniques were described as very short, powerful and precise with as little movement offline as possible. His grabbing techniques consisted of “Meguri” – literally meaning flexibility and rotating of the wrist producing subtle connection points producing the maximum result with minimal levels of effort. For Junichi Nishimura, Kobayashi’s most memorable phrase was: “Teach everything you know/have, then you feel thirsty for a higher level”.Some other words people often heard him repeat while on the mat were “Itsumo manaka” (always towards the centre) and “Ima” (right now). It is through the efforts of the shihan’s and sensei’s and their combined achievements that have led to an effective, applicable, realistic and non-aggressive martial way that is essential in this changing modern-day life we live in.

Junichi Nishimura at 19 years of age entered Osaka Education University where he began practicing Aikido. He trained under Hirokazu Kobayashi and many of his followers. He practiced Aikido in Japan for the following 15 years before finally moving to New Zealand in 1987. Soon after settling into New Zealand he established an Aikido school called “Buikukai NZ” which now has clubs in both Auckland and Christchurch. At times Nishimura is invited to teach self-defense exclusively to police officers in Auckland. The Aikido taught by Nishimura is effective and effortless, through utilising body-taught techniques free of tension and, therefore, making training suitable for all people, male and female – regardless of size or strength.